Missing 7-year-old Lagos Boy Found, Reveals How He Was Kidnapped By Three Men 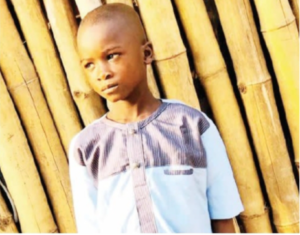 Seven-year-old Adam Afolabi has been found five days after he went missing in Mushin area of Lagos State.

Adam was declared missing after he was sent on an errand to buy biscuits at a shop in their neighbourhood.

The minor said three yet-to-be-identified men abducted him and whisked him away to an undisclosed location.

Confirming the latest development to newsmen , Adam’s father, Kazeem, who reunited with his son at the police station, said the boy was kidnapped by the men who bundled him into a bus.

He said the minor was later found in the Ojo area of the state roaming about the streets as he could not find his way home.

“We have found the boy. He was found in Ojo. According to him, three men kidnapped him and bundled him into a bus. He said they dropped him off at Ojo without hurting him,” Kazeem said.

“My son was taken to the police station by the Baale of the community where the kidnappers dropped him,” he added.