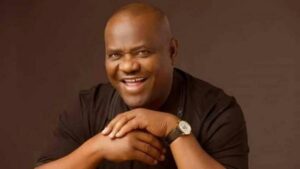 Governor Nyesom Wike has accused President Muhammadu Buhari and a former Minister of Transportation, Rotimi Amaechi, of attempting to interfere in the 2019 elections but the people of Rivers State resisted the alleged move.

Wike stated this on Wednesday in the Ikwerre Local Government Area of the state when he flagged off the Igwuruta Internal Roads project.

According to the Peoples Democratic Party (PDP) chieftain, Nigerians will be surprised at the outcome of the 2023 elections if the Independent National Electoral Commission (INEC) ensures the polls are free and fair.

Wike’s comment came hours after Buhari promised not to allow intimidations of any sort, whether materially, morally, or physically during the 2023 elections.

The President spoke when he received some governors of the All Progressives Congress (APC), led by Kebbi State governor, Atiku Bagudu, at the State House.

Commenting on the statement credited to the President by his spokesman, Femi Adesina, Wike thanked Buhari for promising not to interfere in the next elections.

“I thank Mr President for coming out and telling his governors he won’t interfere because of course he interfered last time by using the Army, through the former minister of transportation (Amaechi) but the people stood up by saying this will not happen.

“I thank Mr President that he wants to leave a legacy of conducting a free-and-fair election.”