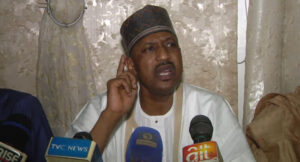 A former member of the House of Representatives, Sani Sha’aban, says the National Assembly cannot impeach President Muhammadu Buhari over the rising insecurity across the country.

The APC chieftain stated this in Kaduna on Thursday while briefing reporters in the state capital.

Insisting that the federal lawmakers are largely responsible for the country’s economic and security challenges, Shaaban took a swipe at the National Assembly members for allegedly failing in their oversight functions, especially as regards security and economy.

He alleged that they are only interested in oversight functions when they are broke so that they can get allowances and ‘Ghana Must Go’ attached.

According to him, some National Assembly members who have failed in their representative duties and lack what they will tell their constituents in seeking re-election, were behind the impeachment saga, as they want to use President Buhari as a scapegoat.