Man Kills Parents, Injures Two Others With Pestle In Jigawa 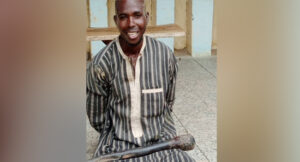 A 37-year-old man, Munkaila Ahmadu, has killed both his parents and injured two other people with a pestle in Zarada Sabuwa village in the Gagarawa Local Government Area of Jigawa State, northwest Nigeria.

The Public Relations Officer of the Jigawa State Police Command, DSP Lawan Shiisu, who spoke to our correspondent, said Ahmadu has no history of mental illness nor was he under the influence of any hard drug.

He said, “Munkaila Ahmadu used a wooden pestle and attacked his 70-year-old father, Muhammad, and his 60-year-old mother Hauwa.

“The 37-year-old also did not spare Kailu Badugu, a 65-year-old, and Hakalima Amadu, a 50-year-old who lived in the same compound with his parents.”

“Upon receipt of the ugly report, a team of Policemen visited the scene of the crime and conveyed the victims to General Hospital Gumel.

“The said Ahmadu Muhammad ‘m’ and Hauwa Ahmadu ‘f’ were certified dead by doctors as a result of head injuries sustained. While Kailu Badugu and Hakalima Amadu who sustained various degrees of injuries were admitted.”

However, the police confirmed the arrest of the suspect, and the exhibit was recovered.

The Commissioner of Police, Jigawa State Police Command, CP Aliyu Tafida, directed that the case should be transferred to SCIID Dutse for discreet investigation and possible prosecution of the culprit.