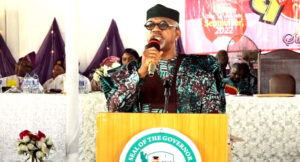 As activities towards the 2023 general elections gather momentum, religious leaders have been challenged to promote the much needed peace and unity among Nigerians as they actively participate in the electoral process towards the enhancement of the nation’s political space.

At the convention themed – Go in this thy strength, the governor described the church as an essential instrument for sustaining peaceful coexistence.

He urged men of God to preach peace and speak up against violence before, during and after the elections.

The governor also charged the church to put its efforts together towards the socio-economic development of the nation, saying that the church has an important role to play in human capital development by promoting the welfare of the people as it is a mixture of the larger society.

He, however, assured that his administration would continue to promote peace among the various religious bodies and organizations by discouraging hooliganism, thuggery, vandalism and other vices across the state.