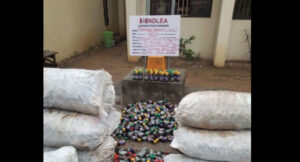 The National Drug Law Enforcement Agency (NDLEA) has warned Nigerians regarding the surfacing of a new deadly psychoactive substance which has made its way into various parts of Nigeria.

According to an article by the Special Assistant to the Chairman/Chief Executive of the NDLEA, Mahmud Isa Yola, the substance called Akuskura is of different varieties, and is used in both liquid and powdered form by people who are mostly seeking to raise their levels of psychological or nervous activity in the body.

In his piece, Mr Yola explains that Akuskura represents a serious threat to public health and poses a challenge for drug policy.

Below is the full article as put out by the NDLEA.

Recently, there has been a rapid emergence of a dangerous new psychoactive substance known as Akuskura/Kuskura, which is made of herbs laced with tobacco and cannabis and which is rapidly replacing controlled psychoactive substances, dominantly in the northern and south-west parts of Nigeria. When taken, the substance sometimes causes sudden, violent, irregular movement of the body and contraction of muscles.

The name Akuskura, sometimes known as kuskura or akurkura, is derived from the Hausa word “kuskura” noun, which can be used interchangeably to mean gargling and rinsing.

The substance, which is of different varieties, is used in both liquid and powdered form by people who mostly seek to raise their levels of psychological or nervous activity in the body, or put it in simple terms, get high.

Akuskura came into the front-line on social and conventional media when the National Drug Law Enforcement Agency, NDLEA, intercepted over seven thousand bottles of the illicit substance along the Abuja-Kaduna express road, slated for distribution across seven northern states of Borno, Kano, Kaduna, Sokoto, Zamfara, Gombe and Nasarawa. Although the seizure is the biggest made so far, there were several arrests and seizures made by the agency in different parts of the country.

Following the record-breaking seizure, the Director General of the National Agency for Food and Drug Administration and Control, NAFDAC, in a press briefing at the agency’s headquarters in Abuja on August 19th, made the announcement of the official ban of the psychoactive substance.

She said the agency received a number of reports of the use of a herbal preparation known as “Kurkura,” particularly in the country’s South West and Northern axis.The agency swung into action and carried out intelligence and enforcement actions.

The term “new” does not necessarily refer to new inventions—several NPS were first synthesized decades ago—but to substances that have recently become available on the market.

As a new psychoactive substance, Akuskura represents a serious threat to public health and poses a challenge for drug policy.

The negative health impacts and social harms of NPS are frequently largely unexplored, which makes prevention and counseling extremely difficult.

It is difficult to analyze and identify the many different chemicals that are simultaneously present in the drug.

The above facts place people who take new psychoactive substances such as Akuskura at a high risk. According to the UNODC, the use of NPS is often linked to health problems.

In general, side effects of NPS range from seizures to agitation, aggression, and acute psychosis, as well as potential development of dependence. NPS users have frequently been hospitalized with severe intoxications.

Many NPS have no or very limited safety data on their toxicity and carcinogenic potential, and information on long-term adverse effects or risks is still largely unknown.

The purity and composition of products containing NPS are often unknown, which places users at high risk, as evidenced by hospital emergency admissions and deaths associated with NPS, often including cases of poly-substance use.

Akuskura is largely distributed under the guise of herbs. They are mostly retailed by local herbalists and Islamic chemists, to mention but a few.

Akuskura wholesaler in Zaria city explained that the substance is originally meant for the treatment of headaches and catarrh and serves as a poster remedy against jinns and evil spirits.

He says kuskura is also used as a sex enhancer among men. However, there is no scientific explanation for whether the substances are safe or can cure any form of sickness.

This therefore drives home the fact that the substance has no established medicinal value. Despite its unsafe nature, Akuskura is patronized by thousands of people in Nigeria.

Maikudi Shaga, a 31-year-old Zaria-based mechanic, confessed in a newspaper interview that he is addicted to the substance, adding that he uses the liquid substance at least seven times a day and said it gives him the energy to work efficiently without being subjected to physical fatigue.

Another user, Malam Adamu Mohammed, who spoke in a media interview, said that he does not see Akuskura as an illicit substance and that is the notion held by many other users. He said he has been using it for more than a year now and it cures malaria, typhoid, pile headaches and increases his performance in bed.

The spread of Akuskura is undoubtedly aided by the fact that the substance is largely and ignorantly misconstrued as a medicine. A whole-seller in Zaria was quoted to have said he sells more than 300 bottles of Akuskura in a day.

Another factor that aids the prevalence of Kuskura is its affordable price. The substance is readily available in Islamic chemists’ and other local herbal centers at a very cheap price. With a bottle sold at the cost of N100 and sometimes a drip for N50, the Akuskura is affordable even to a low-income earner.

Thirdly, the substance gives both hallucinogenic and stimulant effects to its users. Hence, it is filling the void of controlled substances, which are now very scarce due to the surge of arrests and seizures by the National Drug Law Enforcement Agency (NDLEA). With a bottle of codeine sold between N7,000 And N25,000 and beyond, Akuskura offers substance abusers an easy alternative with just N100 or even less.

However, the adverse effect of Akuskura remains disturbing. Like all other illicit substances, Akuskura gives a euphoric effect of being “high” for a certain period of time.

However, there are health-threatening short and long time effects such as dissociation, violent episodes, psychotic episodes, compulsive desire to commit crime, aggression, perceptual distortion, hallucination and many others.

The Chairman/Chief Executive of the National Drug Law Enforcement Agency, Brig. Gen. Mohamed Buba Marwa (rtd) OFR, during a brief interview with the British Broadcasting Cooperation, BBC Hausa, said that the agency will continue to dismantle the clandestine factories behind the production of the illicit substance, adding that the recent seizure of over 7,000 bottles by the agency sends a warning to the peddlers of the illicit drug that the NDLEA will continue to deal with them within the ambit of the law.

This should serve as a desist warning to the users and traffickers.