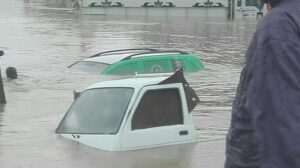 Seven persons have died in the last four days in the flood caused by heavy rainfall in Niger State.

Seven local government areas are experiencing the negative impact of the rainfall, which has lasted for four days unstopped.

He said several others have been rendered homeless as a result of the flood.

“The State has started experiencing the negative impact of the flooding with houses, farmlands, bridges and some linked roads washed away in some LGAs located at up and downstream of the four Dams.

“These rendered many homeless and have affected the socio-economic activities of the communities. The local government areas include Lavun, Magama, Rafi, Kontagora, Gbako, Mashegu and Wushishi,” he said.

He called on the people living in riverine areas to relocate to safer grounds that have already been identified urging residents across the state to avoid dumping refuse in drainages and limit their activities around the river banks during this period to avoid being flooded.

Inga also cautioned against people standing under trees during rainfall and staying in substandard structures as the heavy rainfall is predicted to be accompanied by violent windstorms.

In a related development, Kontagora town has been overtaken by flood as the heavy downpour has displaced residents and made people lose properties, businesses and farmlands.

The flood affected residents of Unguwan Yamma, Sabon Gari, BCG, and Mayanka which are all inside the Kontagora town.

The Kontagora incident was as a result of the heavy downpour which occurred on Wednesday night into Thursday morning entered the homes of people and several of them are yet to get the water out of their homes.

A businessman, who is into fish rearing, Malam Musa Umar, said that he lost more than 6,000 fishes to the flood apart from other valuables which he lost.

The residents of Kontagora have called on the state government to intervene and help them in alleviating the impact of the flood.

The Director General of the Niger State Emergency Management Agency (NSEMA) confirmed the incident in Kontagora saying that they are still conducting an assessment of the damage caused by the flood.