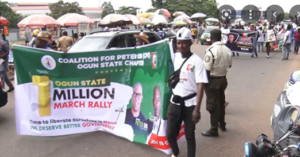 Members of the Labour Party under the aegis of coalition for Peter Obi presidency on Saturday held a one-million man walk for its presidential candidate, Peter Obi and his running mate, Datti Ahmed in Abeokuta, the Ogun state capital

The walk, which took off from the popular Kuto market in the state capital, saw members march through major streets before terminating at the Panseke market.

Some of the members of the coalition appealed to members and party faithful to remain calm as activities towards the general elections gather momentum.

Speaking to journalists during the walk, a member of the coalition, Tolulope Philips said the walk is to create more awareness and drum support for a Peter Obi presidency.

He said Obi remains the best among other candidates for the job.

Similar marches have been held in other states including Benue, Rivers and Edo.