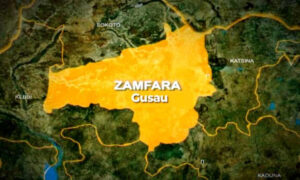 The terrorists invaded the town while residents were observing Friday Jummat prayers and started shooting sporadically before abducting the worshippers.

According to sources from the community, one of the residents Habibu Idris was shot during the attack and he is currently receiving medical treatment

A resident, Aliyu Zugu said the whole community has been deserted due to the attack

“Bandits invaded Zugu town and they kidnapped unspecified number of people and shot one person, he has been hospitalized battling for his life,” the source said.

“Right now, the whole town is scattered, people are running away, leaving the town.”

Meanwhile, Police authorities in the state said the Command has deployed additional tactical operatives to the area in other to complement the ongoing rescue efforts of the abductees

Police spokesperson, SP Mohammed Shehu in a statement made exclusively available to Channels Television on Saturday morning said normalcy has been returned to Zugu town after the bandits attack

He said: “Sequel to the abduction in the remote village of Zugu in Bukkuyum LGA, yesterday 2nd September 2022, where some people were abducted, the Zamfara state Police command has deployed additional Police tactical operatives to support the ongoing effort of Area Commander and DPO in rescuing the kidnapped victims hale and hearty.”

Shehu further explained that “following Police response to the distress call from the area, bandit’s further attempt to invade the neighbouring communities and abduct innocent people was repelled and normalcy had since been restored, while effort to rescue the abducted victims unhurt and arrest the perpetrators of the crime is currently ongoing.”

The state’s Commissioner of Police, CP Kolo Yusuf, also assures of the command’s commitment to rid the state of criminal activities, appeals for continuous support and collaboration to all the security operatives in an effort to achieve this mandate.