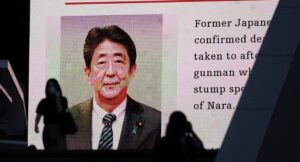 Japan expects to spend around 1.7 billion yen ($12 million) on a state funeral for assassinated former premier Shinzo Abe, the government said Tuesday, despite controversy over the plan.

Abe was shot dead on the campaign trail in July, and the government expects dozens of current and former heads of state to pay condolences at the September 27 service in Tokyo.

But recent polls show about half of Japanese voters oppose the publicly funded event.

Security is expected to cost around 800 million yen, with another 600 million to be spent on hosting and 250 million for the ceremony, top government spokesman Hirozaku Matsuno said Tuesday.

“Delegates from more than 190 foreign (countries and regions) will likely participate,” he told reporters at a regular briefing.

The funeral will be held at Tokyo’s Nippon Budokan, a venue used for concerts and sports events that also hosted Japan’s last state funeral for a former prime minister in 1967.

But state funerals for former politicians are rare in Japan, and a weekend poll published Monday by the Yomiuri Shimbun newspaper found that 56 percent of voters oppose the event, against 38 percent in favour.

Other recent polls have shown similar levels of opposition, and Kishida has said he is ready to answer questions on the issue in parliament.

His government’s approval ratings have taken a hit in recent weeks, in part due to the funeral decision.

Some opponents are against spending public money on an event honouring a politician, while others think a state funeral effectively forces public mourning or minimises Abe’s nationalist views and alleged links to cronyism.

Abe’s accused killer, Tetsuya Yamagami, who is in custody, targeted the former leader believing he was linked to the Unification Church.

Yamagami’s mother reportedly made large donations to the church, which her son blamed for the family’s financial difficulties.

A small private funeral for Abe was held at a temple in Tokyo shortly after his death, with thousands of people gathering outside to lay flowers and offer respects.