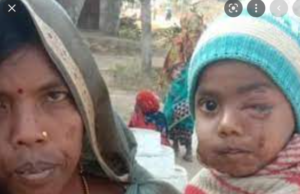 An Indian mother fought off a tiger with her bare hands to save her toddler from its jaws, an official said Wednesday.Archana Choudhary stepped out of her house in the central state of Madhya Pradesh on Sunday night as the 15-month-old boy wanted to relieve himself.A tiger believed to have strayed from the nearby Bandhavgarh Tiger Reserve pounced on them, local official Sanjeev Shrivastava told AFP.
It attacked and tried to sink its teeth into the child’s head but the mother leapt to the rescue, Sanjeev who said the tiger kept trying to snatch the boy until villagers heard her screams and rushed to her rescue. The mother who suffered punctured lungs and wounds to her abdomen while the toddler had deep gashes on his head.

Nearly 225 people were killed in tiger attacks between 2014 and 2019 in India, according to government figures. India is home to around 70 percent of the world’s tigers and the tiger population was estimated at 2,967 in 2018.