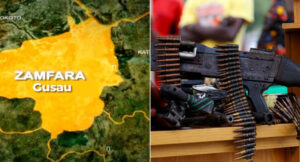 Authorities in Zamfara have said that the 43 Muslim worshippers who were kidnapped at Zugu community in Bukkuyum Local Government Area of of the state have been freed.

There are suggestions that they were on Tuesday night, at about 10:30 pm after the payment of a five million Naira ransom.

Sources say the kidnappers also requested and got supplies of several jerry cans of petrol.

Members of the Zugu community disclosed that 44 persons were kidnapped from the village but one person died in the bandits’ camp as a result of torture.

The other 43, however, returned to the village unhurt and have since been reunited with their families.

The police are yet to give full details of the release, however, after the abductions, the Zamfara command deployed additional tactical operatives to the area to ensure that normalcy returns.

The state’s Commissioner of Police, CP Kolo Yusuf, also assured of the command’s commitment to rid the state of criminal activities, and appealed for continuous support and collaboration to all the security operatives in an effort to achieve this mandate.

Spread the love ...let others enjoy this story
Share
Previous Nigerian woman gives birth at 33,000ft on flight from Turkey to the UK
Next Yahaya Bello’s Inciting Video Is An Act Of Terrorism, Says PDP