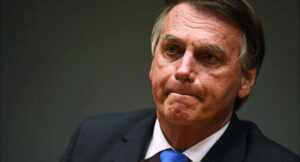 President Jair Bolsonaro on Thursday declared three days of national mourning in Brazil for Britain’s Queen Elizabeth II, who died after 70 years on the throne.

The far-right president, who is running for reelection next month, said in a note in the official gazette that the gesture was “in condolence for the death of her majesty the queen.”

Elizabeth II, Bolsonaro wrote on Twitter, was “a queen not just to Britons, but to all of us.”

“She was an extraordinary and singular woman whose example of leadership, humility and love of country will continue to inspire us and the world forever,” he added.

Brazil, a former Portuguese colony, does not have particularly close ties to Britain.

As the presidential palace in Brasilia lowered the flag to half-staff, some questioned whether the president had ulterior motives for the show of sympathy.

“She left her mark on an entire era,” the leftist leader wrote, alongside a picture of him greeting Queen Elizabeth at Buckingham Palace during a 2009 visit to London as president.