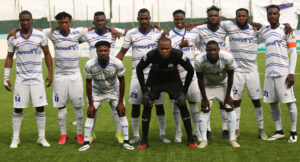 The overall winners over two legs will advance to the group stage of the competition.

Rivers State Governor Nyesom Wike rewarded each player with $20,000 for winning the Nigerian league for the first time in their history in June.

“The Governor has also announced that if you qualify for the group stages of the Champions League, you will receive $40,000 (41,000 euro) each,” Green told the team.