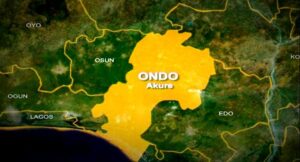 A Chief Magistrate Court sitting in Akure, the capital of Ondo State, has ordered that 18-year-old Tope Momoh be remanded for allegedly killing his mother, Stella Momoh.

Tope was alleged to have strangled his mother to death during an argument in Ikakumo, a town in Akoko North-East Local Government Area of the state on September 6, 2022.

The defendant was arraigned before the court on a one count for murder.

The police prosecutor, Nelson Akintimehin, told the court that the defendant strangled his mother to death in the middle of the night for calling him a bastard.

Akintomehin also said adding he the defendant confessed to the commission of the crime two weeks after the deceased had been buried.

According to the prosecutor, the offence committed contravenes Section 319 (1) of the Criminal Code, Cap 37, Vol. II Law of Ondo State, 2006.

He prayed the court to remand the defendant in a custodial centre, pending the outcome of advice from the Director of Public Prosecutions.

In his plead, the defendant said, “I did not have rest of mind since my mother has been buried. So, I was forced to confess that I strangled her to death. I want the court to show me mercy.”

The Chief Magistrate, Musa Al-Yunnus, in his ruling, ordered the defendant to be remanded at the Olokuta Correctional Centre, Akure. He subsequently adjourned the case till October 20, 2022.

Spread the love ...let others enjoy this story
Share
Previous It’s A Miracle Nigeria Is Still One, Adeboye Declares Seven Days Prayer
Next ‘I’ll Make My Choice At The Ballot’: Ngige Hesitates To Endorse Tinubu Over Obi