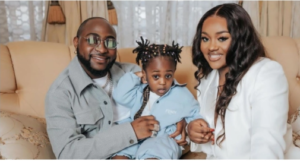 The entertainment industry scene and Nigerians, in general, have received the shocking news of the death of Ifeanyi Adeleke, son of popular, award-winning and global music icon, Davido; and his fiancée, Chioma Rowland.

It was gathered that the first son of the artiste died on Monday at his father’s residence in the Banana Island area of Lagos State.

When asked whether Ifeanyi is dead, the police spokesman said, “Yes, he is; he drowned.”

“No arrest yet but domestic staff have been brought in for questioning,” Hundeyin added.

Also, a close associate of the artiste confirmed the tragic death of Ifeanyi to Channels Television on Tuesday.

Meanwhile, grief-stricken celebrities both at home and abroad have taken to their social media handles to commiserate with Davido and Chioma over Ifeanyi’s death.

British rapper and singer, Stephanie Allen, popularly known by her stage name Stefflon Don, took to her verified Twitter handle to pray for the singer. She tweeted, “Prayers for Davido and Chioma.”

Actor, Williams Uchemba said, “Please say a prayer for David, Chioma and the entire family. Nobody deserves this kind of pain. Rest up little one.”

Muyiwa Ademola via his Instagram handle said, “It is one of the saddest thing when kids are being buried by parents. We really wish it never happened! May The Almighty give the parents and the entire Adeleke family the strength to bear this loss. Rest In Peace Champ.”

Actress, Iyabo Ojo mourning said, “I don’t even know how to react to this rude shock. I was hoping it wasn’t true. My God!!! This is so shocking, sad, devastating & extremely painful.”

Daniel Jr. reportedly died in a swimming pool at the singer’s home in Lagos while he was away for a musical award in Los Angeles, United States.