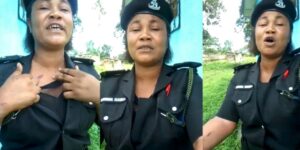 Narrating her ordeal, in a new video making the rounds, Olorunsogo accused ASP Ajayi of being a sexual predator in the habit of using his position to sleep with junior colleagues.

The female officer also claimed he threatened and blackmailed her with sacking if she fails to give in to his demands.

Olorunsogo who appeared all bruised in the video, cried for help after her senior colleague allegedly beat her to stupor and stripped her naked at the station in the presence of her junior Colleagues and some civilians.

According to her, she managed to escape with the help of the civilians.

Spread the love ...let others enjoy this story
Share
Previous Nigeria to compete at 2023 World Athletics Relays
Next Plastic Bottles Exposed To Sunlight Can Cause Cancer – Lagos Govt