FUTMinna: We Are Not Casual Workers, Says ASUU Chairman 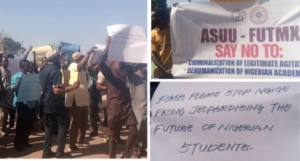 The chairman of the Academic Staff Union of Universities in the Federal University of Technology Minna chapter, Gbolahan Bolarin has stated that members of the union are not casual workers and should not be treated with much more respect.

At a recent march to protest the “ill-treatment” meted out to ASUU members, Bolarin said “Our members were paid for the number of days they had worked and this is unfortunate and demeaning to us”.

Speaking to news during the protest in Minna, Bolarin said the chapter rejects being reduced to mere casual workers.

“FUT Minna has resolved to reject in totality the reduction of Nigerian scholars to casual workers and attempts by the minister of labor and employment to destroy our public universities under any guise.

“We will not allow Chris Ngige ridicule us because Nigerian lecturers are among the best in the world,” the ASUU chairman stressed.

He also stated that the half salary paid to lectures is an insult on the lectures, the academia, the university system and the Nigerian state.

Bolarin further stated that the Federal Government is pushing the lecturers to a point where the aggression will be shifted to innocent students adding that they will do everything to resist the plans of the government.

“They want to push us to the point that we will punish our students. We will try not to allow our students be collateral damage which is their plan”.

Also speaking, the Student Union Government president of FUT Minna, Isyaka Yahaya said the struggle for the survival of the Nigerian University students isn’t only the responsibility of ASUU.

“The survival of the Nigerian University system is not only the responsibility of the lecturers but the students and everyone”.

He said the SUG was joining to show support for their lectures and are willing to go to any extent to ensure that their lecturers are treated better.

“Whatever decision ASUU takes, we are in support and we will follow them and shut down any place. The government should get ready to kill all of us.”