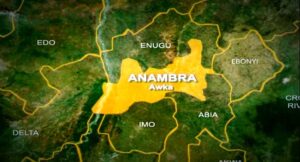 A fire outbreak that started around 2am on Monday razed two blocks of shops at the Kano Street section of the Main Market in Onitsha, Anambra State.

Although the cause of the fire is yet to be ascertained, the Anambra State Fire Service has since deployed its men to the scene.

According to the State Fire Chief, Martin Agbili, a distress call was put across to him around 2am concerning the fire outbreak and he immediately deployed his men to the area and they had been trying to quench the fire which continued to rage.

He said his men would ensure the inferno would be put out no matter how long it would take them adding that his men had gone to refill twice on an effort to put out the fire.

He decried the increasing rate of fire disaster within the state and called for caution.

Reacting to the incident, the Anambra State Public Relations Officer, Tochukwu Ikenga confirmed that the situation was under control and that the no loss of life though goods worth millions of naira has been affected.

He disclosed that preliminary information showed that the cause of the fire was as a result of electrical upsurge from a cosmetics store in the storey building.

Ikenga said police monitoring personnel are still at the scene of the fire incident to ensure continued safety and security.

The police spokesman also used the opportunity to advise members of the public to always turn off their appliances before leaving their homes or offices.