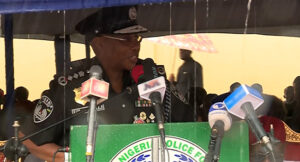 The Inspector General of Police (IGP), Usman Baba on Monday, commissioned the Police Intelligence and Surveillance Centre built by the administration of Rivers State Governor, Nyesom Wike administration to provide technical support to the police and other security agencies in the state.

Wike also restated his administration’s commitment to the protection of lives and property in the state, saying more investment would be made in providing security infrastructure.

The IGP, who hailed the governor for making the job of the police easy in the oil-rich South-South through the provision of key infrastructure, appealed to other state governments to provide similar facilities to make policing easier.

Baba arrived in the state to a full complement of salute by the Force’s Guard of Honour at the venue of the inauguration in Port Harcourt, the state capital, in the company of the governor.

While the interior of the building was not revealed for security reasons, the facility with at least 17 offices and conference rooms, is said to be equipped with the latest computerised security systems that can bring all part of Rivers to one point of view.