I Won’t Leave One Naira Debt For My Successor- Wike 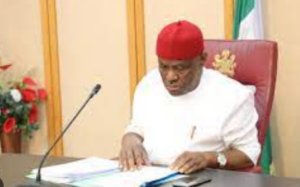 Rivers State Governor, Nyesom Wike, has stated that he plans to hand over a debt-free economy for his successor to build on.

Wike made this remark during the commissioning of the Rivers State University Teaching Hospital (RSUTH) Renal Centre and House Officers Quarters on Wednesday.

“I have told anybody who cares I will not leave a debt, one naira debt for my successor. I will not. I want him to start on a clean note,” Wike said while addressing respective stakeholders.

“Let him not say I came and met a debt of 50 billion naira, of course, I will not do that.”

The governor also revealed he was confident of his various achievements across the state to which his detractors have commended him.

“It is not about how much money you have amassed, it is what legacy you have put on ground, that once you leave can you turn left or right and say I am happy, I am justified, I have not disappointed my people.”

“I made promises and those promises have been fulfilled ”

“I can put my two hands in my pocket and walk confidently on the road and say I thank God Almighty for the opportunity.”

Wike had on Tuesday. urged the people of the state to vote in the candidates of the PDP for the governorship, National Assembly, and state House of Assembly seats during the commissioning of the Rukpokwu-Igwuruta Link Road in the Obio-Akpor Local Government Area.

According to him, there was no doubt about who his successor was going to be ahead of the upcoming polls.

He also advised his supporters to disregard pretenders to the state’s number one position.