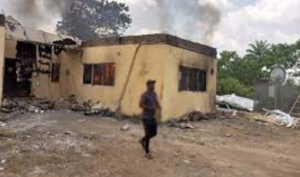 Ahead of the 2023 general elections, the Independent National Electoral Commission (INEC) has assured Nigerians it will recover from the recent attacks on its facilities.

Speaking at the induction retreat for resident electoral commissioners held in Lagos on Wednesday, INEC Chairman, Professor Mahmood Yakubu, said, “Our responsibility is to conduct elections. I want to assure Nigerians that we will recover from these attacks.

“The lost materials will be replaced but there is a limit to our ability to keep replacing lost or damaged items in just 86 days to the general elections.”

Within the space of three weeks, two attacks were carried out on INEC local government facilities in Ogun and Osun. Though INEC said its Ebonyi office was also attacked on Sunday, the police said fire gutted the facility.

Two weeks ago, the commission had lamented the spate of attacks on its offices, putting the number of INEC offices attacked by hoodlums at 50. The attacks were recorded in 21 states.

To forestall a reoccurrence of these attacks, Yakubu said the commission will work closely with security agencies and traditional rulers.

The INEC boss called for the arrest and prosecution of the culprits, “so that vandals and arsonists don’t feel that behaviour is acceptable in our country”.

“Five local government offices of the commission were attacked by yet unknown persons. Buildings are being destroyed, critical facilities lost,” he added.

“These facilities include a total of 1,992 ballot boxes, 399 voting cubicles and 22 electric-powered generators as well as thousands of uncollected PVCs. These attacks must stop and the perpetrators apprehended and prosecuted.”

Speaking on Sunday’s attack in Ebonyi State, the INEC boss described the situation as regrettable because the arsonists struck two days after electoral officials relocated to its office in the South-Eastern state.

He also decried what he called misleading information in circulation about the possibility of voting without a Permanent Voter’s Card.

According to him, the position of the law is clear and no one without a PVC will be allowed to vote.