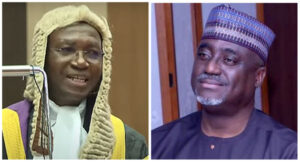 The President of the Nigerian Bar Association, Senior Advocate of Nigeria, Yakubu Maikyau, on Tuesday, declined to participate in the call to bar ceremony presided over by the Chairman, Body of Benchers, Chief Wole Olanipekun (SAN).

In a statement, the NBA president said to do so would be to endorse, celebrate or condone a practice that he considered unwholesome and unprofessional, by virtue of the Rules of Professional Conduct for Legal Practitioners 2007.
The NBA president’s action comes two days after he wrote a letter to the Chairman of the Body of Benchers asking him to step aside and not preside over the call to bar ceremony.

He cited allegations of professional misconduct against Olanipekun in the wake of the scandalous email by a former partner in his firm, Ms Adekunbi Ogunde to SAIPEM, an expatriate company claiming that the senior lawyer uses his office as BoB chairman to influence judges and get favorable judgements for his clients.

In his statement, the NBA President detailed what had transpired at Monday’s meeting of the Body of Benchers.

“At the meeting of the BoB held on 5 December 2022, I drew the attention of the Chairman to my letter and called for deliberations on same since it directly impacts on the propriety of the Chairman presiding over the Call to Bar ceremony, but this was not done nor were the hard copies of the letter distributed to the Benchers,” it read in part.

“The meeting of the BoB was adjourned to January 2023, on a date to be fixed by the Chairman. In the circumstances therefore, having regard to my firm persuasion that the matters raised in my letter should have led the BoB to ask the Chairman to recuse himself in the interest of safeguarding the integrity of the Legal Profession, I am in good conscience unable to attend and participate in the Call to Bar Ceremony.

“The NBA under my leadership cannot be part of the ceremony superintended by the current Chairman of the BoB for all the reasons stated in my letter under reference. To do so will be to endorse, celebrate or condone a practice that I consider unwholesome and unprofessional, by virtue of the Rules of Professional Conduct for Legal Practitioners 2007.

“The NBA under my leadership remains committed to the protection of the integrity of the Bench and the Bar and will not shirk that responsibility.”