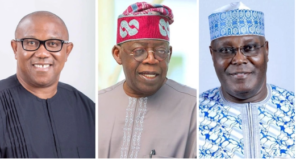 A member of the Tinubu-Shettima Presidential Campaign Council, Dele Alake says the 2023 All Progressives Congress (APC) presidential candidate, Bola Tinubu is human and he is not immune to gaffes.

“No human being is immune to gaffes. That does not translate to one’s capacity to rule,” he said on Channels Television’s Politics Today programme on Monday.

Tinubu, 70, a former governor of Lagos State, has been recorded to have made some mistakes during speeches at some rallies.

However, Alake said Obi and Atiku have also made gaffes at rallies.

“Just a few days ago, Datti Ahmed, the Vice-Presidential candidate of the Labour Party committed a great gaffe.

“Atiku committed a gaffe in Kaduna when he said they should vote for him because he is a northerner…If it was Tinubu that made that, all heavens would have come down.

“In fact, Obi is noted for false statistics, anybody knows that…So, there is really nothing to clear about that. Asiwaju is a human being like every other person,” Alake said.

Earlier on Monday, Tinubu made an appearance at Chatham House in London, the United Kingdom, and revealed some of his plans for major sectors like defense, economy, education, and technology.

He also delegated some of his allies including serving governors and lawmakers to answer questions posed by participants at the world-leading policy institute and think-tank forum.

Speaking on why Tinubu delegated his allies to respond to questions, Alake, who was with the APC candidate at Chatham House, said the former Lagos governor wanted to showcase his team, adding that governance is not a one-man show.