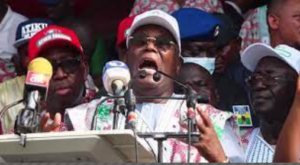 The Adamawa-born politician also said the All Progressives Congress (APC) lied that its presidential candidate, Bola Tinubu built Lagos after the nation’s return to democracy in 1999.

Atiku, who spoke at the PDP presidential rally at the Tafawa Balewa Square in Lagos, warned the people of the state against returning APC to power at the federal and state levels, saying “a single family has ruled the state for 23 years”.

He said the Alliance for Democracy (AD), the Action Congress of Nigeria (ACN) and the APC governments in Lagos since 1999 lied about developing the state.

“The AD, ACN and APC governments have been telling you lies that they developed Lagos, they did not develop Lagos at all, na lie; they are lying to you,” he said.

Atiku urged Lagosians to free themselves from the control of the Tinubu family by voting in the PDP governorship candidate in Lagos, Olajide Adediran better known as Jandor.

“Therefore, it is time for you, the people of Lagos to liberate yourselves from a family’s government to a people’s government that is going to be led by Jandor,” he said.

Atiku further promised to restructure Nigeria along the lines of fiscal federalism as well as privatise the country’s refineries.

Atiku is in the 2023 presidential race alongside top contenders including Tinubu and Peter Obi of the Labour Party.