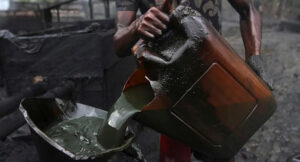 The National Security Adviser, Major General Babagana Monguno, has estimated that the Federal Government may lose $23bn in 2023 if crude oil theft continues.

He made the comment on Tuesday during the inauguration of a special investigation panel set up to check crude oil theft in the country.

General Monguno expressed worries that the nation currently produces one million barrels of crude oil per day as against the two million barrels daily target by the Organization of Petroleum Exporting Countries (OPEC).

While lamenting the poor revenues accruing from the petroleum sector, he charged members of the committee to work towards bringing reducing the menace.

The committee is expected to submit its report by February 21st, 2023.

The Nigerian National Petroleum Company Limited (NNPCL) said last October its cooperation with security forces was reducing theft and will bring production consistently back up.

Critics say oil theft in Nigeria, one of Africa’s largest petroleum producers, is a much wider problem of corruption involving elements of the security forces and local political leaders.