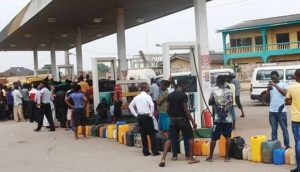 The Lagos State Government has said it will no longer go ahead with the timetable fixed for major and independent petroleum marketers operating on major roads.

The 9 am to 4 pm restriction will no longer be enforced following assurances from some of the offending filling stations, the state government said.

According to a statement by the state Commissioner for Transport, Dr. Frederic Oladeinde, the decision to suspend the directive to marketers was due to the reactions it generated.

He explained that the measure is to stop the traffic congestion that has resulted from the activities of the marketers and not to compound the hardship motorists and commuters have experienced because of the lingering fuel shortage.

“For the avoidance of doubt, filling stations are not restricted from doing their business, but fuel marketers have a responsibility to ensure that their activities do not cause any disruption whatsoever to traffic flow. It is against the law to impede the free flow of traffic on our roads,” Oladeinde said.

He added that Traffic Management Agencies have been directed to invoke the law should any marketer be found to have allowed queues on its premises to spill onto major roads in a disorderly manner that impedes traffic flow.

The state government had on Thursday announced the decision to restrict filling stations operating along major roads and traffic-prone areas within the state due to traffic congestion caused by motorists queuing to buy fuel.