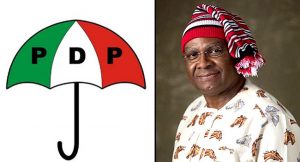 The Peoples Democratic Party (PDP) has suspended former Enugu State Governor, Senator Chimaroke Nnamani as a member of the party.

This was contained in a statement on Friday by the party’s spokesman, Debo Ologunagba, saying the suspension is with immediate effect.

He explained that the decision to suspend Nnamani is based on allegations of anti-party activities levelled against the ex-governor and was taken by the National Working Committee(NWC).

“The National Working Committee (NWC) of the Peoples Democratic Party (PDP) has after a very extensive review and consideration of the affairs of our Party in the country, pursuant to the provisions of the PDP Constitution (as amended in 2017) approved the suspension of Senator Chimaroke Nnamani (Enugu State) and Chief Chris Ogbu (Imo State) with effect from today, Friday, January 20, 2023, over allegations of anti-party activities,” the statement reads.

“The PDP urges all leaders, critical stakeholders and teeming members of our Party across the country to remain united and focused on the mission of our Party to Rescue, Rebuild and Redirect our nation from misrule.”

Spread the love ...let others enjoy this story
Share
Previous Lagos Arraigns Couple For Torture, Assault Of Their Children
Next Oil Marketers Raise Alarm Over Alleged Threat To Shut Fuel Stations In Rivers