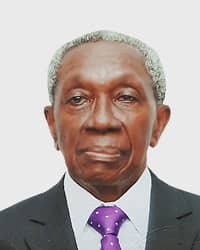 The founding Pro Chancellor and Chairman of the Governing Council of the Redeemer’s University, Prof Folagbade Olajide Aboaba has died at the age of 90 years.

The Professor Emeritus of Agricultural Engineering who was until his death on Saturday 21st January a National Elder and Member Board of Trustees of the Redeemed Christian Church of God, RCCG and also Chairman of the Technical Advisory Board and Lands Committee of the Church was born in Lagos on 8th March 1933.

He lost his beloved wife, Olabisi Ama Aboaba at 73 when she died at their Victoria Island Lagos home on 20th November 2018. She was born 1st September 1945 in Kaduna.

Sources at the Redeemed Christian Church of God camp were mute on his death but impeccable source said he died quietly of old age ailment at his V. I. residence on Saturday evening.

The astute Professor always playing prominent roles at Holy Ghost Conventions of the Church was until his death the Zonal Pastor of RCCG Redemption Pavilion Parish a church of the elites at the high brow Victoria Island of Lagos in Nigeria.

Two famous incidents of the late elder was an interview granted the Punch Newspaper published on 9th March 2013 where he disclosed that he used to smoke 20 sticks of cigarette per day before his conversion to Christianity.

The other which almost snuffed out life from him was when he had a body shot down medically and after being given first medical attention in London on March 9 that year (a day after his birthday) he was told by British Medical Consults not to go near pregnant women and children because he was radioactive but he survived it. Before he was whisked to London he could not eat but was on fluid.

Prof Aboaba had many children in the Lord from the Redeem fold and the Ibadan Varsity Christian Union (IVCU) who have been contacting this reporter for confirmation of the news of his passing away.
Eniola Olatunji reporting.
#redeemedchristiancurchofGod.
#ibadanvarsitychristianunion.
#redeemersuniversity.