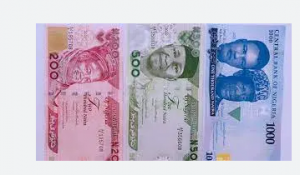 The Nigeria Governors’ Forum (NGF) has called on the Central Bank of Nigeria (CBN) to consider the poorest and most vulnerable households, among other concerns arising from the recent naira redesign and cash withdrawal policy.

The NGF had on Tuesday invited Emefiele over the redesigned N200, N500 and N1,000 banknotes and the timeline to phase out old notes.

The NGF Chairman, Governor Aminu Tambuwal of Sokoto State, in a statement at the end of the forum’s first meeting of 2023, noted that the governors were not opposed to the objectives of the naira redesign.

“We, the members of the Nigeria Governors’ Forum (NGF), received a briefing from the Governor of the Central Bank of Nigeria, Mr Godwin Ifeanyi Emefiele, on the Naira redesign, its economic and security implications including the new withdrawal policy.

“Governors are not opposed to the objectives of the Naira redesign policy. However, we observe that there are huge challenges that remain problematic to the Nigerian populace,” he said.

In the circumstances, Tambuwal added, the governors expressed the need for the CBN to consider the peculiarities of states, especially as they pertain to financial inclusion and under-served locations and made three resolutions.

“1. Work closely with the CBN leadership to ameliorate areas that require policy variation particularly the poorest households, the vulnerable in society and several other citizens of our country that are excluded.

“2. Collaborate with the CBN and the Nigerian Financial Intelligence Unit (NFIU) in advancing genuine objectives within the confines of our laws, noting that the recent NFIU Advisory and Guidelines on cash transactions were simply outside the NFIU’s legal remit and mandate.

“3. Finally set up a 6-member Committee to be Chaired by the Governor of Anambra State, Professor Charles Soludo and the Governors of the following States: Akwa Ibom, Ogun, Borno, Plateau and Jigawa as members, to engage the CBN in addressing anomalies in the country’s monetary management and financial system,” the statement reads in part.

The CBN also announced new cash withdrawal limits for individuals and corporate entities, which it later increased to N500,000 and N5 million, respectively.

However, the policy has attracted global and national concerns especially given the short time span for implementation.

The World Bank, last month, expressed concerns over the impact of the naira redesign policy on Nigerian households and businesses, arguing that the timing and short transition period of the Nigerian naira redesign may weigh on economic activity.

In a similar vein, the Senate urged the CBN to extend its deadline for the phasing out of the old notes from January 31st to June 30th, 2023.