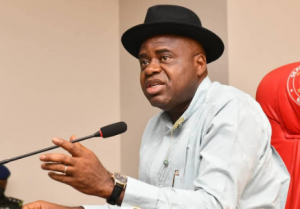 The Governor of Bayelsa State, Duoye Diri has called on youths to shun electoral violence and use their Permanent Voter Cards (PVCs) to elect credible leaders with the capacity to deliver on sustainable development, peace and economic prosperity.

The governor said this while addressing youths during a programme tagged, ‘Prosperity Youths Day 2023’, at the Ecumenical Centre in Igbogene.

He described the PVC as a tool that confers political power on the electorate and that what the youths needs is the card, which he said is more powerful than an AK-47 rifle.

He said, “The PVC is your AK-47. You do not need any gun or machete to intimidate anyone. Bayelsa youths are not violent but intelligent and productive.

“Elections are very serious business of choosing leaders that will lead them towards prosperity, development and growth.”

He also urged youths to shun drug abuse and all acts of violence before, during and after the elections and stressed the need for them to key into the government’s various policies and programmes targeted at building their capacity.

“Do not allow politicians to use you as canon fodders to advance their selfish political interest. They tell you lies and give you peanuts to harass and intimidate other politicians contesting with them.

“Always believe in God and yourselves. Shun drug abuse and cultism. What God has for you, nobody can take it away.”

He also appealed to anyone involved in kidnapping and other criminal activities to have a change of heart as the government would not condone any breach of the peace and stability of the state.

The head of the Prosperity Youth Movement, Doubara Kumokou in his speech appreciated the governor for identifying with youths of the state by putting in place various empowerment programmes.

The governor then unveiled two musical albums and presented a vehicle each to three youths representing the three senatorial districts and one to a non-indigene.