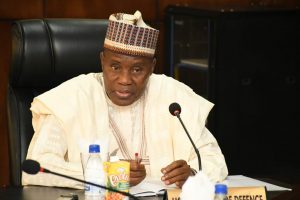 The Minister of Defence Maj Gen Bashir Salihi Magashi (rtd) CFR has appealed to the United Nations to support the overall good performance of the Nigerian Military to completely end insecurity in parts of the country. 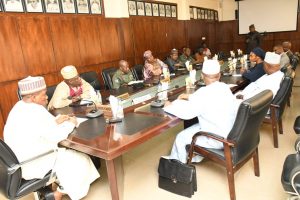 General Magashi stated this during a meeting with the delegation of the experts of the United Natlons Independent High Level Panel on Security, Governance and Development in the Sahel, held at the Ministry of Defence Headquarters, Ship House Abuja. 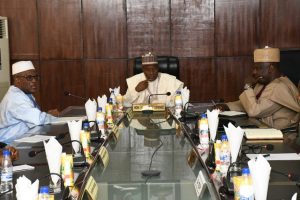 He stated proudly that Nigeria is doing pretty well under the watch of the Commander-in-Chief of the Nigerian Armed Forces, President Muhammadu Buhari in curtailing the effrontery and the audacity of the Terrorists especially in the North Eastern part of the country. 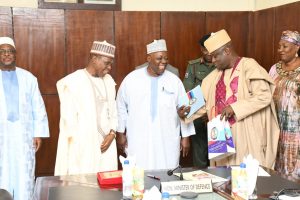 The Defence Minister put it on record comparatively that Nigeria is contributing more than other Cooperating States in counterpart funding, deployment of manpower and provision of other logistics in Multinational Joint Task Force, MNJTF. 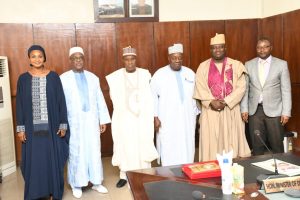 He however made serious case for improved resources on the Part of the United Natlons towards the promotions of global peace and regional economic prosperity to reduce the high level of Poverty at all levels.

The Head of the UN Mission and Leader of the four-man delegation Mr Abdullahi Boureima alongside Nigerian panelist Professor Jibrin Ibrahim put the mandate of the UN High – level Panel in context bothering on Security, Governance and Development concerns facing the Sahel Region.

They said part of the reasons for the meeting in all countries of their assignments including Nigeria is to articulate and aggregate views on how to effectively summount the existential challenges facing the Sahel Region.

While thanking the Minister for approving the visit, they said capturing Nigeria’s perspective on the way forward is germane to their assignments which set the tone for the meeting.

The interface which had the Permanent Secretary Ministry of Defence Dr Ibrahim Abubakar Kana, mni in attendance and other top management as well as the representative of the Ministry of Foreign Affairs Ambassador Danlami Ibrahim dovetailed into questions and answers session to bring the strategic meeting to its logical end.
SIGNED –
Mohammad Abdulkadri Special Assistant to the Minister of Defence (Media &Publicity)
24 th January, 2023.

Spread the love ...let others enjoy this story
Share
Previous Why Rivers PDP Is Not Campaigning For Atiku – Wike
Next COURT ORDERS A LADY TO PAY ₦150,000 FOR COLLECTING ₦3,000 TRANSPORT FARE FROM HER BOYFRIEND AND REFUSED TO VISIT HIM AS PROMISED