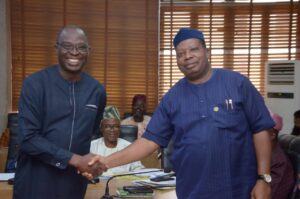 Ogun State House of Assembly has cleared and confirmed Hon. Onadeko Onamusi as Commissioner designate alongside other nominees sent to it by the State Governor, Prince Dapo Abiodun.

The Speaker of the State House of Assembly, Rt. Hon. Olakunle Oluomo said it was “profitable to always do good anywhere we found ourselves”, noting that the capabilities coupled with the character displayed by the nominees before their appointment made it easy for the House to clear and confirm them.

Oluomo, in a statement signed by House of Assembly Service Commission’s Press Officer, Busayo Faleti, charged them not to relent in the discharge of their duties, admonishing them to put in more strength, vigour and commitment while having the citizenry in mind in their service to the people.

The confirmation of the nominees was done through a motion moved by the Majority Leader Yusuf Sherif, seconded by Abdul Bashir Oladunjoye and supported by the whole House through a vote.

In their separate reactions, Hon. Onamusi and Hon. Aina Akinpelu pledged their readiness to deliver efficiently any assignment entrusted in their care, assuring the lawmakers and the State of their commitment in achieving successful governance.

Other members of statutory commissions screened and cleared were Nurudeen Aina Akinpelu, Adeleye Ademola for Teaching service Commission and Adesola Elegbeji for the Judiciary Service Commission.