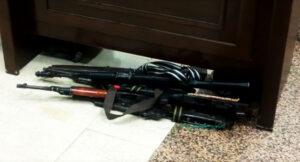 Men of the Rivers State Police Command’s surveillance team have apprehended and arrested a suspect in possession of an AK-47 rifle.

The cops, who were led on the operation by the Officer Commanding Surveillance, Octopus Strike Force, SP Vincent Elekwa, were observed with the suspect at the State Police Headquarters at No.5 Moscow Road, Port Harcourt.

They said they were there to brief the Commissioner of Police on their operation.

The Police Public Relations Officer of the Command, SP Grace Iringe-Koko declined to comment on the situation.

“The CP is yet to give permission, after he does I’ll brief the press,” she said.

Recall that on Monday, the Command paraded suspects involved in a variety of crimes even as the Commissioner, Friday Eboka, promised that the Command would continue to fight insecurity in the state.